A High School Diploma Made All the Difference

Posted on July 26, 2009 by People Story Network
This is George. I met him while he was sitting in the shade with a cool beverage and a video poker game. He had brought his grandson up to Blanding to see about a job, and he was enjoying the cool of the morning while he waited. George was born and raised as a part of the Navajo Nation that occupies the reservation that includes Monument Valley, and his life is fascinating to me. 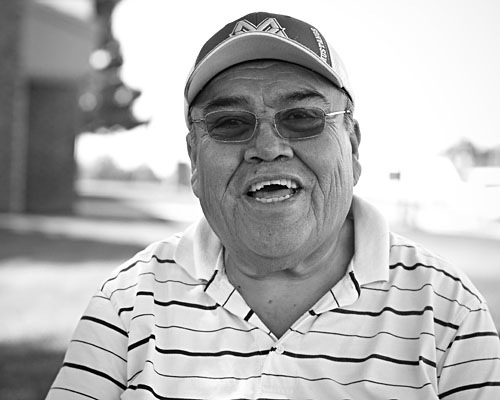 I’ve driven through the Monument Valley area many times and marveled at the scenery and despaired at the poverty of the people that live there. Often I see mobile homes parked in the middle of the desert. A double ribbon of compacted dirt road leads out to one solitary trailer – an old pickup might be parked there, but no wires lead to these homes. As those trailers sit there in the shimmering 110 degree heat, I wonder if it ‘s possible that people really live in that kind of place without electricity.

George assured me that they do. When he was growing up there as a child, he said, there were very few people that had plumbing, electricity, or any of the modern conveniences that we take for granted. But there was no bitterness in it for George. He was so happy to report that the current leadership of the Navajo Nation is very forward thinking, and that most of the people that live on that reservation now have the same standard of life as the rest of America.

I was just amazed at his bright outlook. For George everything in life seemed to be just one big opportunity – things aren’t as good as they could be, but things are getting better all the time. His big open heart was just so grateful for the amazing things around him. He commented on how great it was to be able to sit in the shade and enjoy ice in the middle of July. I guess when you have grown up with no electricity it’s easy to be grateful for a cup of ice and a cool beverage. I soon learned that he is grateful for other things I take for granted too. 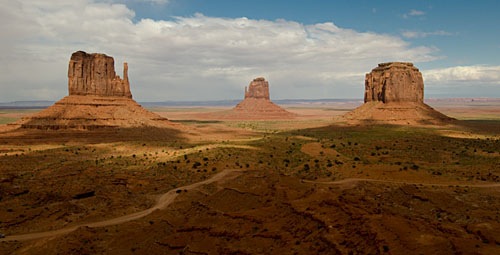 When George was 14 his dad got a job in the local sawmill. The sawmill is in ruins now, but at the time it meant that George’s family had to move from Monument Valley to Blanding, Utah so his dad could work. George told me that one event in his life has made all the difference. You see, it enabled George to go to Junior High and High School. George had a rare opportunity. The chance to be a Native American with a high school diploma.

He told me that he, his wife and his family have always had the nice things in life because he was able to get his diploma.

As we talked, he told me he has worked for the school district down in the Monument Valley area for 32 years. He started as a bus driver, then worked his way up to teachers aid, then assistant coach. Now he works in the district offices in transportation administration. I could feel the joy in him as he told me about the great opportunities he had enjoyed, how good life had been for his family because of his education, and how now his grandkids are thinking about college. He could afford to move off of the reservation to a small town close by, a event he was very happy about, but he was really excited about education being a great asset for the Navajo Nation. He could see them starting becoming an educated people and the opportunities that fact presented were very exciting to George..

A high school diploma changed his life. Changed his family’s life. Is starting to change the destiny of a nation. I could feel the power of that as I talked to this outgoing man. It gave me something to think about as I drove – about the opportunities education, both formal and informal, have given me in my life. I’m glad I had a chance to think that through. I’m glad to be reminded to appreciate some of the simple things – the great simple things of my life.

1 Response to A High School Diploma Made All the Difference