Just Enough Cattle to Cause Trouble

Well, technically he’s a retired cattleman. He told me he sold the ranch, and only has a wet farm and enough cattle to cause trouble. I wondered outloud how many cattle it takes to cause trouble.

He used to run thousands of them, if you’ve crossed a cattle guard on a mountain in southern Utah in the last 35 years, chances are you’ve been driving past some of Hardy’s cattle. 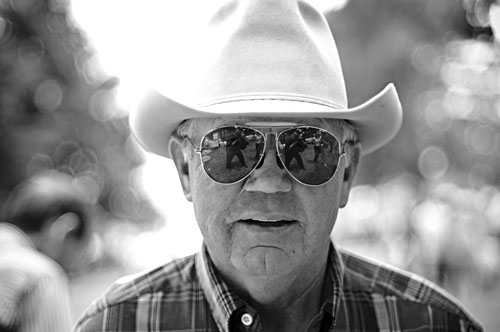 However more amazing that thousands of cows and bulls running around on the open range, is the fact that Hardy has seven daughters. SEVEN! I can see why, each time he’s thinking “ok, odds are catching up, this one’s got to be a boy!”. Heartbreaking really.

I have one daughter. More drama in that one human being than all of my boys put together – times two.

He told me there had been plenty of drama, and it still kind of continues. But Hardy has that quiet strength kind of personality. I met a couple of his daughters, and they have a great relationship with their dad. He was a man of few words, but the way his family interacted with him spoke volumes. A life of hard work and putting his family first has Hardy in a pretty good spot now. I’m glad our paths crossed.

This entry was posted in Article and tagged cattle, daughters only, family, father. Bookmark the permalink.

2 Responses to Just Enough Cattle to Cause Trouble