The Adorable Logic of a Two-Year-Old

Meet Kait, she’s a two year old friend that comes to see us from time to time.

The first thing she does when she comes in the door is runs and grabs my finger and starts pulling me to the back door saying “om… om…. om!” (of course we’ve learn that this is short-speak for “come!” I would like to think she likes me enough to share her experience with me – but not really, she can’t open the back door by herself. As I open the door she starts to yell with excitement “shicken, shicken!!” Then she sees them and the excitement takes her right out of the door. 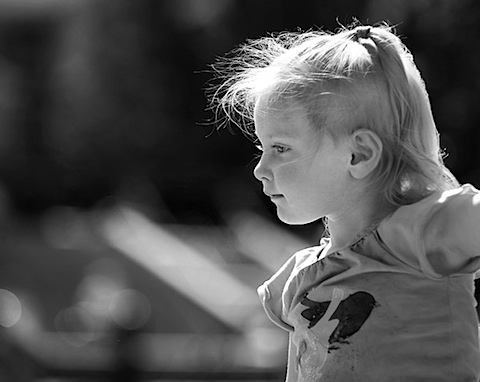 I love having chickens in our backyard – delicious eggs for sure, but they are just kind of calming to have around. Love having them, don’t necessarily love them – they are not pets. Kait runs up to them and tries to pet them–but they are chicken you see and run higgledy piggledy to escape. Kait then runs and gets some chicken chow out of the feeder and tries to feed them by hand… of course they’ll have none of that because, you might remember, they are chicken… of everything for the most part, and especially unpredictable two-year-old girls.

To wind up her whirlwind tour of the backyard Kait heads for the chicken coop. She lifts the door that leads into the laying box and checks for eggs. Yesterday she squealed with delight as she found three eggs – two green and one white. I knew the younger chickens had donated their share for the day. Kait picked all three up and carefully moved to the back door where she went in and carefully put them on the counter. Adorable! I’m not going to lie – she’s adorable.

An hour later I saw her open the door to the laying box again and find it was still empty. It didn’t seem to change her mood at all, she went on playing in the planter pots on the patio…

A couple of hours later I was completing a honey-do on the deck and Kait came out of the back door again. She was so excited yelling “egg, egg, grumpa, grumpa! egg!”. She had a green egg in her adorable little hand holding it high for me to see. I wanted to, but I’m glad I didn’t interfere – I figure an egg more or less isn’t going to kill me, so I chuckled/laughed at her, I confirmed that indeed it was an egg “you have an Egg Kait!!!”, and watched.

She went back to the coop, opened the door to the laying box and saw the empty box again. Very gently sat the egg back in the box – let the door slam shut and brushed her hands together with a satisfied look that comes from a job well done. With nary a glance in my direction she ran over to where the chickens were gathered in the shade and started babbling happily to them.

What motivates a two-year-old? I’ve no clue, but I sure love hanging out with them to see what two-year-old logic comes up with next!

1 Response to The Adorable Logic of a Two-Year-Old